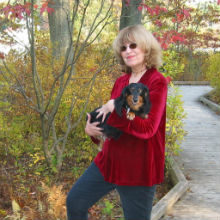 Our wife, mother, grandmother, sister, aunt, friend Trudy Rose Brody succumbed to the effects of Polymyositis in January 2017. She had a disease that was diagnosed in 2006 and she had treatments with varying degrees of success; but she had no cure and she had no idea what caused the disease.

In 2009 Trudy founded and led a Suffolk County Myositis “Keep in Touch” (KIT) support group that enabled those who were afflicted with the various forms of myositis to connect with other myositis patients and their families. This group met monthly to provide mutual support and share ideas for dealing with the disease.

As the disease caused her immune system to attack and weaken her muscles the manifestation for Trudy was primarily difficulty in climbing stairs and rising from a sitting to a standing position. However, with weakened muscles she also was prone to falls and resulting injuries that led to increasing loss in mobility. The immune system suppressing medications resulted in decreased resistance to infections.

It is our hope that others can be helped through increased research that will find the definitive cause(s) so the disease onset can be averted; and an effective cure can be found for those already afflicted.

This is a rare disease that does not receive the attention and research funding available to the more common diseases. It is often the family, friends, and colleagues of people with diseases such as myositis who provide the resources. Please help if you can. When you want to honor or memorialize a person or event, please consider this as an opportunity.

Thank you for your support.